I recall we were in the ladies’ room, believe it or not, right after class when my classmates and I noticed how surprisingly tired we were after the three-hour session of “Mapping the Creative Economy” course last Friday. We were laughing about the lazy state we have reached knowing that we did nothing that morning but sit down and play with LEGO® SERIOUS PLAY® throughout the entire session. But wait a moment; I am not a lazy person. On the contrary, I am one of those annoyingly bubbly, hyperactive people who are always either multi-tasking or constantly on the move. So, why was I that exhausted? It was at that moment that I understood the importance of that session and how mind-challenging, fruitful and by consequence, somewhat mentally-exhausting it was for all of us.

However, before I reveal these connections to you, let us rewind a bit and focus on the purpose of last week’s session. In fact, last Friday marked our first official session in the course after Induction. Hence, the purpose of that session was to introduce us to the course and help us understand what “Mapping the Creative Industries” is and why it is so important. Interestingly, we had to read two valuable reports and watch three inspirational videos prior to attending last week’s session. Below is a summary of the main points raised in each one of them:

1. “Defining the Creative Industries” [http://goo.gl/Es0MPK] which forms Chapter 4 of “The Staying Ahead: The Economic Performance of the UK’s Creative Industries” document by the Work Foundation, provides a definition of the creative industries by analyzing its nature and examining its similarities and distinct characteristics, such as the challenges these industries face, their expressive and functional value, as well as, their contribution to the economy and society –all of which allow these industries to share membership of the same group.

2. “A Dynamic Mapping of the UK’s Creative Industries” [http://goo.gl/TfHiW4] released back in 2008 by the London-based innovation think tank Nesta provides a much closer look at the Creative Industries and argues that the UK Department of Culture, Media and Sport (DCMS) classification of the creative industries is inconsistent because it separates the creative industries “from important codes with high creative intensity that account for large amounts of employment.” The report also shows that the creative industries do not rely, either wholly or solely, on traditional content or ICT (Information and Communication Technologies) activities alone. Instead, the report stresses that owing to the new economic phenomenon that has emerged we are now witnessing “a parallel application, within single industries, of ICT and other creative skills together”. Consequently, any attempt to “separate ICT from other creative work or to reduce the creative industries either to an offshoot of content production, or for that matter a branch of the software industry,” according to Nesta, “ will not succeed”.

3. Two YouTube videos [http://goo.gl/IydCJ0] and [http://goo.gl/PGhmCm] by Sir Ken Robinson that tackle the subject of education and creativity and call for an urgent change in the current educational paradigm. Throughout the videos, Robinson makes a profoundly moving case for creating an education program that nurtures rather than undermines creativity. He defines creativity as the process of “creating something original and useful.” He also believes that the dominant approaches to education which date back to the cultural age of Enlightenment, and unfortunately continue to operate nowadays, tend to suppress people’s creativity and make them feel marginalized by their own education rather than allowing them to discover their own talents. Robinson also notes “that every country on earth is currently rethinking and reforming its public education”. However, these countries are falling in the fatal mistake of trying to meet the future by doing exactly what they used to do in the past— alienating along the way millions of kids who no longer see the point of going to school. Interestingly, in the face of the digitization we are witnessing nowadays, a lot of kids are being distracted by current technologies. Hence, the need to move away from traditional curricula and standardization tests present in the current paradigm. The videos conclude with three important key messages: We have to think differently about human capacity; We have to acknowledge the fact that great learning happens mostly in groups; There is an urgent need to reform the habits of learning institutions as well as the habitats they occupy.

4. One short YouTube video [http://goo.gl/VYk20C] that interviews a group of experts in the field who explain the importance of the creative industries, or what some refer to currently as the “soft industries” (due to their permeable, flexible, and recent nature) in the UK. It explains how the creative industries are currently making a wide use of technology to create new services and products. Nowadays, technology is an enabler, whether cameras, sound recording, applications, screens, mobile devices, and so on. Technology coupled with the skills of designers, actors, directors, developers, or programmers can drive innovation, especially that products nowadays require depth of content, attention to detail and strong advertising. The video highlights how the people who do the creative work behind the scenes are what makes the customers nowadays relate and connect with the product—which is why it is highly important for big companies and investors to finance start-ups right from the start and at an early stage in order to give creative a brain-space to be creative.

With that being said, let us examine now last Friday’s session in light of the above findings. In a course that preaches the values of collaboration, communication, problem-solving, innovation, creativity, and divergent thinking what better way to introduce and define what “mapping the creative industries” is than with LEGO® SERIOUS PLAY series. On the company’s website, LEGO® SERIOUS PLAY® is defined as “an innovative, experiential process designed to enhance innovation and business performance” [http://goo.gl/MtGuJD]. Often in traditional learning institutions, too many opportunities are lost because ideas and opinions are not being voiced and shared by students who either feel shy, less motivated, not involved, or not taken seriously. Hence, these institutions tend to resort to the traditional passive spoon-feeding routine that is based on teacher-designed didactic lectures and instructions that ultimately turns students into passive learners. Instead, the MACE program at Kingston University deals with exactly that challenge. Through the LEGO® SERIOUS PLAY®, we were asked to sit in groups of three or four people from different cultural and educational backgrounds and we had try to respond to the various tasks we were given, one of which was “defining the creative industries”. 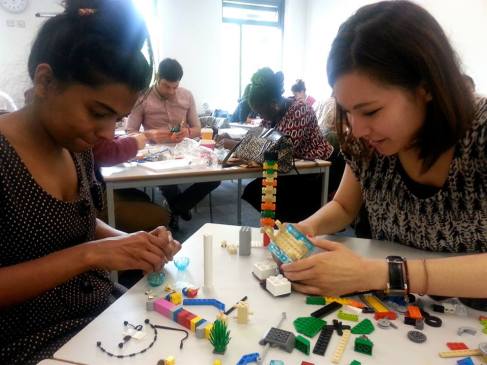 Throughout the session, one could clearly see that students were dynamic, smiling; interacting and getting to know each other; debating on how they should respond to the task and almost every group member was involved and contributing in building the LEGO. Additionally, one could notice that students who normally would never talk or present publicly where all of a sudden expressing themselves and describing their work perfectly fine in front of everyone else. Interestingly, almost every group member had something to say vis-à-vis their LEGO compilation and made sure they said it out loud and defended their vision and how they think their LEGO compilation defines what the creative industries are. As Sir Ken Robinson mentions in one of his videos [http://goo.gl/IydCJ0] to facilitate creativity one must have collaboration, diverse environment, less standardization and linear thinking, as well as, a culture that accepts and even encourages failure. In retrospect, that was exactly what we have experienced last Friday. Together, as a team, we have learnt about and reached a holistic definition of what the creative industries means. Students from different disciplines, cultures, age groups came together to generate unique solutions and provide endless definitions by adopting an original hands-on and minds-on learning process, which is LEGO® SERIOUS PLAY®, to  gain a better and deeper understanding of our course—and most importantly without the fear of being wrong or the risk of failing in the task.

Since everyone can contribute to the discussion, the decisions, and the outcome, no wonder that LEGO® SERIOUS PLAY® is considered by many businesses to be highly beneficial as a language, a communication tool, a problem solving methodology, and a driver to innovation.

5 responses to “LEGO® SERIOUS PLAY®: Building Your Own Definitions!” 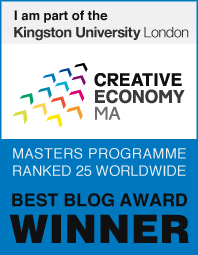